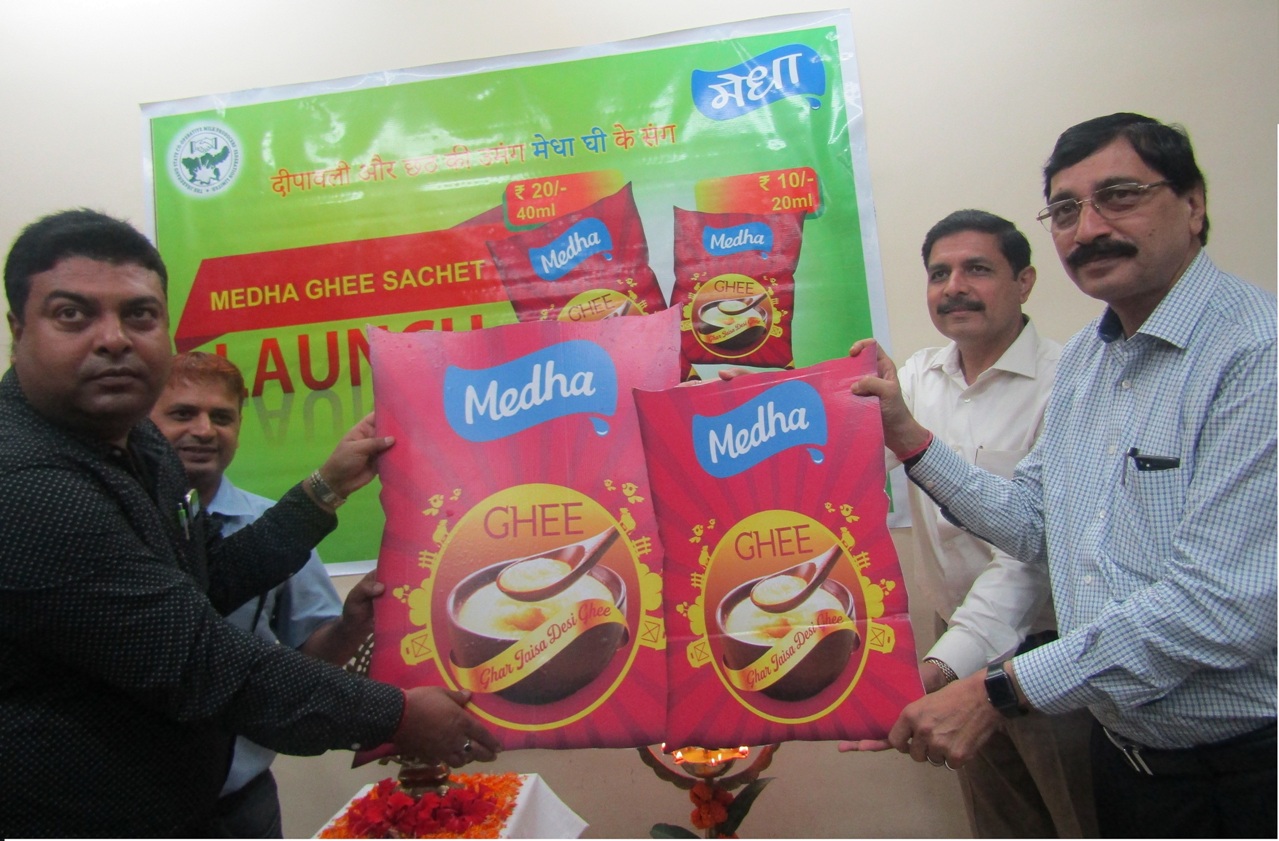 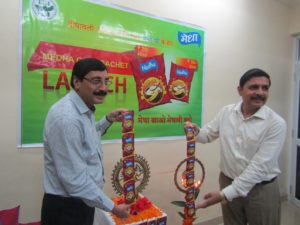 The previous logo of Medha lacked consistency and was often confused as ‘Megha’ by the audience. The letters lacked synchronicity. Some of the elements of the logo were redundant and so a new one had to be designed. The new logo silenced all these issues and moreover attached the theme of ‘Taazgi’ with the brand name. The letters were composed in a constant flow and retained the previous colors since they had an established mental association amongst the audience.

The packaging before had little emotional and native connect with Jharkhand. The new packaging has visual imageries of a dairy farm, a milk cannister, state bird of Jharkhand and the state flower Palash. These elements register in the subconscious of the customers. Two themes have been reinforced through the packaging: ‘Authenticity’ and ‘Freshness’. Moreover, the new tagline ‘Taazgi Jharkhand Ki’ also adds to these themes. In three words, it makes clear that Medha belongs to Jharkhand and that it is pure.

The relaunch event of Medha took place in Hotel Radisson Blu, Ranchi on 17th April 2018. The relaunch was backed by many factors including the above ones. Some of the other ones included new addition of Vitamins A&D in the milk, increase in employment for the farmers and to address the issue of malnutrition in underprivileged children. The event was attended by notable personalities of the state and the has been a success and an achievement for Medha.

Increase in Employment Opportunities in Jharkhand through Medha

June 11th, 2018 Posted by medha Blogs 0 thoughts on “Increase in Employment Opportunities in Jharkhand through Medha”

In its initial stages of foundation, Medha had even larger goals than to provide state’s own milk to its residents. Some of these goals were to provide milk packets to underprivileged children for their nourishment, to increase state’s economic status and to provide a source of livelihood to the dairy farmers of the state. All these goals are being achieved at a steady rate.

Since its establishment, Medha has exponentially increased the work opportunities for numerous people. As it is an organization, Medha firstly employed workers for construction of its office. Later, many employees were hired by the organization for carrying out various operations of the brand. Employees for milk production plants were also taken aboard at the three locations where these plants are located, namely Deoghar, Koderma and Ormanjhi.

New production plants are being set up in other districts too, for which many masons and construction workers have been employed. As soon as these plants would launch, we are hoping for a wide increase in the number of people who would be hired for the production and manufacturing process. Many people have been recruited as shopkeepers for the independent Medha milk booths that have been set up throughout the state. We are estimating more employees and recruitments as we expand our territory in other cities too.

History of Medha and its Advancement

June 11th, 2018 Posted by medha Blogs 0 thoughts on “History of Medha and its Advancement”

Medha was instituted in March 2014 by Jharkhand Milk Federation (JMF) as a precursor to the White Revolution in the state of Jharkhand. Apart from the motive of providing state’s own milk to its residents, Medha had another goal for the people. It aimed at increasing work opportunities in the dairy sector for people living in rural areas. For a substantial head start, National Dairy Development Board (NDDB) assigned Mother Dairy to assist the brand in its market operations. This helped Medha to become renowned amongst the public and have a strong foothold in the market. The public were encouraged to use this native source of independent milk production. Till date, Medha has influenced many lives and helped them to progress financially ahead.

Moreover, JMF implemented various Dairy Developmental Programs for a period of five years. Over this time span, there has been a drastic improvement in the production of milk as well as the number of employed dairy farmers. The milk production has reached up to 1,00,000 liters per day. The number of farmers associated with the brand has increased from around 2,000 in the year 2013 to 20,000 in the year 2018. The market share of Medha has also appreciably gone up.

The core ideology of Medha is to ‘stay true to its roots’. This belief is also reflected in their new packaging which shows the countryside area of Jharkhand and their tagline ‘Taazgi Jharkhand Ki’. Medha currently has three milk production plants in the province, located in Deoghar, Koderma and Ormanjhi. More plants are being set up and are set to tentatively launch in the year 2019.

Advantages of State’s own Dairy Brand

Every community has certain requirements that must be met, like food, water, infrastructure and not forgetting – milk. Milk is an indispensable part of Indian households and it is used in a variety of preparations. Most of the people prefer to buy milk from a dairy itself, especially the state’s own dairy brand. When we pick the state’s own brand, we make a contribution to the better development of the state. There are many advantages of picking the state’s own dairy brand which is more than practical as they have an emotional appeal as well.

Freshness
The freshness of milk is the foremost thing of importance for any consumer. In case of state’s milk brand, you get the assurance that the product would be fresher than any other source. The reason for that is simple. The dairy products can reach the consumers without any hassle of travel and longer storage duration.

Promotes any State’s Development
When the state’s own dairy brand is consumed by people at large then the economic benefits are obtained by the state. This same thing turns into a developmental idea for the state.

Emotional Connect
The moment you make the choice of picking the state’s own dairy, you form an emotional bond with the product. Every product of the state dairy is a reflection of love for the state and the culture it represents.So, a state’s dairy product is not just a decision based on practical benefits, it provides the best advantages in all aspects.

Ever since its birth, human dependence on milk has been consistent. The nutritional values of milk are completely unmatched by any other consumable drink. People have gone so far as to declare milk as a complete diet in itself. It is rich in calcium, potassium, vitamin D, proteins, phosphorous, selenium, magnesium, and good fat. It affects the human body in an excellent manner. The positive impact of milk is not just limited to the physical well-being as it also provides a boost to the mental health. The benefits of milk have made it a part of cultural history and diet routine all over the world.

Healthy Bones
Milk is highly nutritious for the bones. Nothing can even come close to the abundance of the calcium found in the milk and other dairy products. A healthy amount of calcium in the diet means healthy and strong bones as well as teeth.

Keeps you hydrated
Milk is a wholesome fluid to keep yourself hydrated. It contains a high amount of water molecules. Thus, the body gets the health benefits as well as better hydration.

Beauty benefits of milk
For ages, people have advocated the benefits of the milk bath. It is not just about the external application. When you consume milk, you get the powerful antioxidants. These antioxidants kill the radicals responsible for skin problems like premature ageing, dry skin etc.

Ideal for growth
When it comes to growing children, then milk is the ideal support system. Due to its nutritional value and presence of protein, it is widely recommended to attain muscle growth. It repairs the muscle tissues and provides healthy development to the body.

Fights depression
Milk benefits also have a connection to the mental health. The vitamin D in milk leads to the production of serotonin. The serotonin hormone is the reason behind a jolly mood, adequate sleep and it also keeps depression at bay.